Bees ready to install.  The moving screens and straps make travel much safer, for me and the bees!

As I finally made my rounds after my month of travel, I discovered the colony at this out-yard was a dead-out.  After a month, it’s a little difficult to say with any certainty  what was responsible for its demise; perhaps my old, faithful 2013 queen finally gave up the ghost, or maybe she was killed in the frantic move from my home yard after June’s bear scare.  The family hosting this colony had worked hard to create a bear-proof enclosure after I had to remove a hive following a bear attack at this site on May 28th.  I sensed their disappointment about the dead-out, and the hunt for a replacement colony was on.  As it turned out, the queen of the new colony is a daughter of the one removed in May.  I took her with a single western box packed with bees, leaving a very populous colony behind to create new young queens. 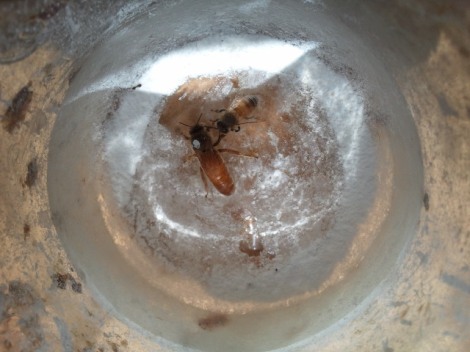 The queen traveled separately in a screened jar to avoid being damaged in the move.  What a beauty she is!

The queen released and welcomed by her workers before disappearing down into the hive.  She’s been marked with a white dot denoting her 2016 birth year.

This hive has an experimental base inspired by Dr. Lynn Royce’s work with tree hive bees.  Dr. Royce uses a debris box beneath her hives that simulates conditions found in tree hollows.  This one has screened ventilation holes and is filled with wood chips and a bit of humus intended to accommodate beneficial hive associates like fungi and pseudoscorpions.  The bees use a small upper entrance in the inner cover.  The ventilation box above the inner cover has screened holes that help the bees keep their hive cool on hot days and allows moisture to escape in the cold months.

I was particularly impressed with how quickly these bees settled in once they were installed.  Despite the car ride and jostling climb up the hill, they remained calm and focused,  orienting to their new site and beginning to forage right away.  It will be a real pleasure to watch them progress!

Beekeeping, so much more than honey